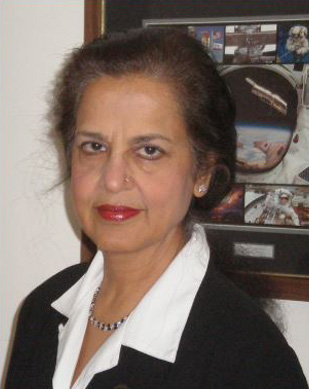 In her role as Deputy Program Scientist, Dr. Hasan works on monitoring and managing the science program for the Webb Telescope. She makes sure that its mission remains possible and true to NASA strategic objectives. Dr. Hasan has been the program scientist for many of NASA missions, such as the Wide-field Infrared Survey Explorer, Gravity and Extreme Magnetism SMEX (GEMS), Stratospheric Observatory for Infrared Astronomy, Hubble Space Telescope, Explorer Program and more.

From 2001-2006, Dr. Hasan also served as the Lead for Astronomy and Physics Research and Analysis (R&A) programs. She was responsible for setting the policy for all R&A programs, overseeing the entire R&A budget and reorganizing research programs to align them with NASA's strategic needs.

In 1976 Dr. Hasan received a doctorate from the University from Oxford, U.K., in Theoretical Nuclear Physics. Till 1985 Dr. Hasan conducted post doctoral research and and held teaching positions in the areas of Theoretical Nuclear Physics, and in Environmental Science. She was the Optical Telescope Assembly Scientist at Space Telescope Science Institute, Baltimore, till 1994, when she joined NASA Headquarters. She received certification for the Senior Executive Service in 2004.

Dr. Hasan has published articles in various peer reviewed journals, such as the Astrophysical Journal, Icarus, Publications of the Astronomical Society of the Pacific and the list continues. She has been honored with prestigious awards and fellowships throughout her outstanding career. For instance, the NASA HQ Exceptional Performance Award in 2008, National Research Council Resident Research Associate from 1981-1983, Commonwealth Fellowship from 1973-1976 and received a gold medal for Physics and merit award as a student.