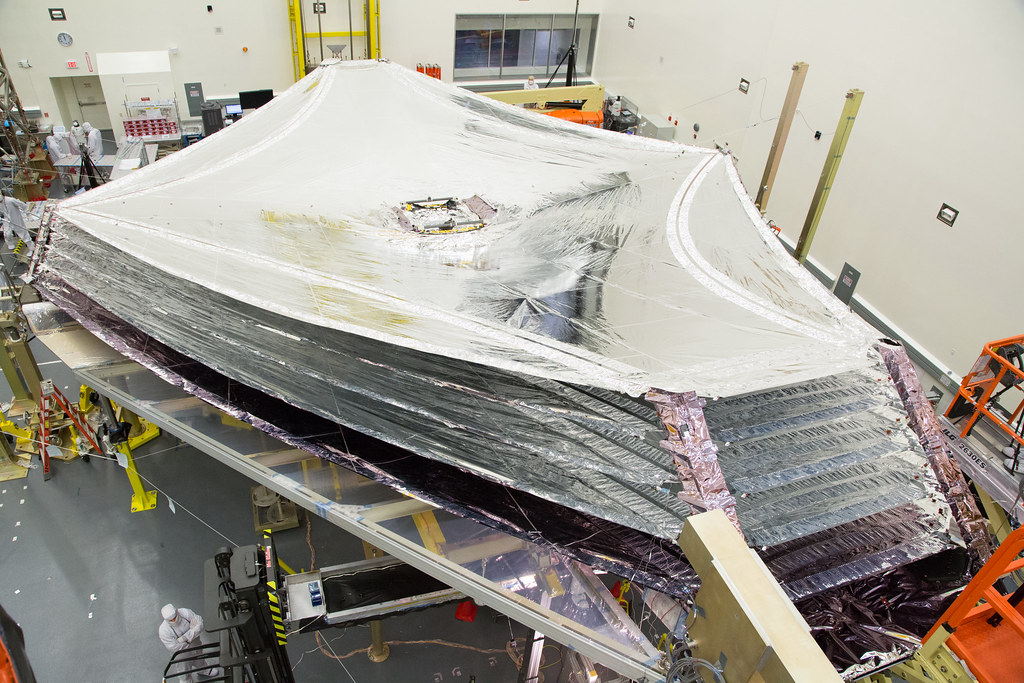 The sunshield separates the observatory into a warm, sun-facing side (thermal models show the max temperature of the outermost layer is 383K or approximately 230 degrees F), and a cold side (with the coldest layer having a modeled minimum temp of 36K or around -394 degrees F). The five-layer sunshield keeps sunlight from interfering with the sensitive telescope instruments. The telescope operates under 50K (~-370F) Photo: Northrop Grumman

The James Webb Space Telescope will observe primarily the infrared light from faint and very distant objects. In order to be able to detect those faint heat signals, the telescope itself must be kept extremely cold. To protect the telescope from external sources of light and heat (like the Sun, Earth, and Moon) as well as from heat emitted by the observatory itself, Webb has a 5-layer, tennis court-sized sunshield that acts like a parasol providing shade. [Actual dimensions: 21.197 m x 14.162 m (69.5 ft x 46.5 ft)]

This sunshield will always be between the Sun/Earth/Moon and the telescope. It's able to be positioned this way because JWST will be orbiting the Sun 1.5 million kilometers away from (but approximately in line with) the Earth.

The sunshield protects the telescope from external sources of light and heat (like the Sun, Earth, and Moon). 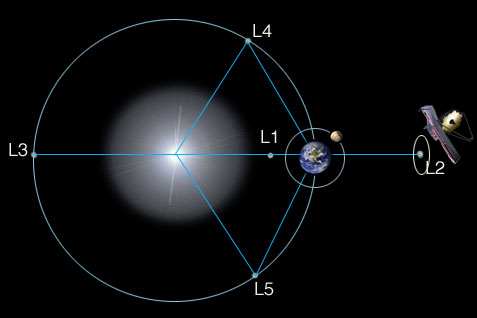 Webb's sunshield is positioned between the Sun/Earth/Moon and the telescope. Webb's orbit at L2 ( more about Webb's orbit ). Image: STScI

The sunshield will allow the telescope to cool down to a temperature below 50 Kelvin (-370°F, or -223°C) by passively radiating its heat into space. The near-infrared instruments (NIRCam, NIRSpec, FGS/NIRISS) will work at about 39 K (-389°F, -234°C) through a passive cooling system. The mid-infrared instrument (MIRI) will work at a temperature of 7 K (-447°F, -266°C), using a helium refrigerator, or cryocooler system.

In addition to providing a cold environment, the sunshield provides a thermally stable environment. This is essential to maintaining proper alignment of the primary mirror segments as the telescope changes its orientation to the Sun. 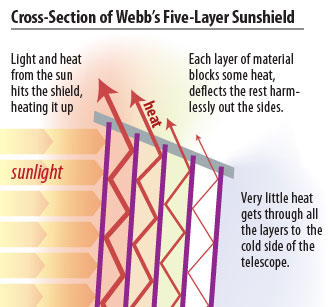 The sunshield is made of a lightweight material with special thermal properties, called Kapton, which is also specially coated.

Read about the special sunshield coating. 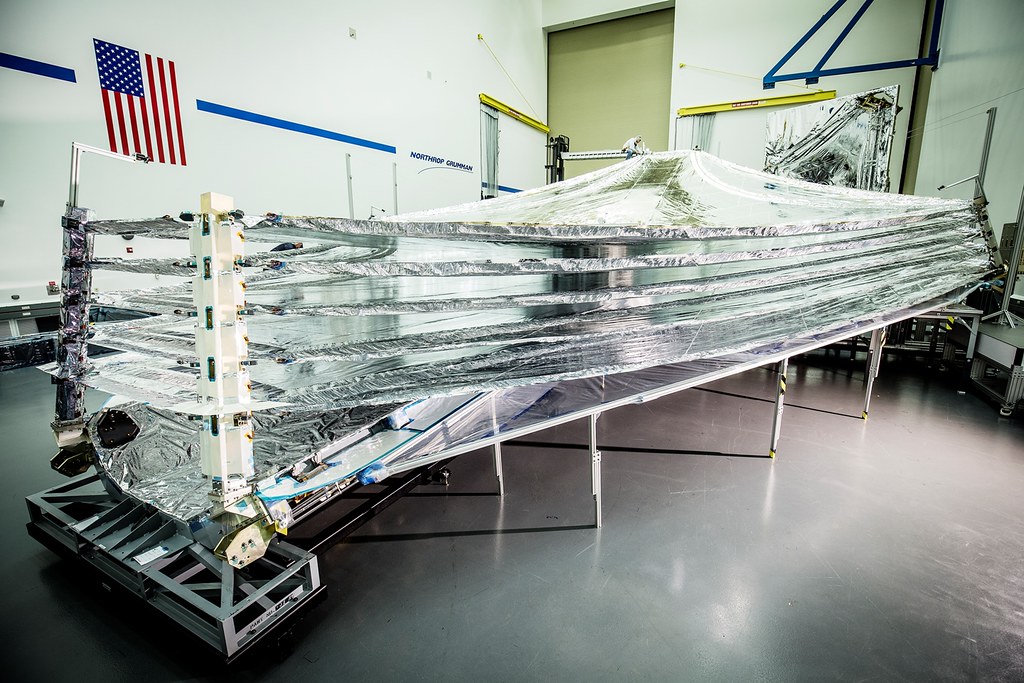 The layers work together to reduce the temperatures between the hot and cold sides of the observatory by approximately 570 degrees Fahrenheit. Each successive layer of the sunshield, made of kapton, is cooler than the one below. The fifth and final layer was delivered on Sept. 29, 2016 to Northrop Grumman Corporation's Space Park facility in Redondo Beach. Photo: Northrop Grumman

The shiny silver material of the five-layer sunshield is a complex and innovative feat of material science and engineering. Each layer is made from a unique composite material, each has a specific thickness and size, and they must be precisely separated in space. There are even special seams and reinforcements to limit meteorite damage.

NASA and its industry partners developed a lightweight, robust way to protect the telescope and mirrors from the sun's infrared radiation in the material that makes up the sunshield. Some of the things that make the sunshield unique are its strong yet ultra-thin material, special kite-like shape, and the special role of its layers.

The sunshield consists of five layers of a material called Kapton. Each layer is coated with aluminum, and the sun-facing side of the two hottest layers (designated Layer 1 and Layer 2) also have a "doped-silicon" (or treated silicon) coating to reflect the sun's heat back into space. The sunshield is a critical part of the Webb telescope because the infrared cameras and instruments aboard must be kept very cold and out of the sun's heat and light to function properly.

Kapton is a polyimide film that was developed by DuPont in the late 1960s. It has high heat-resistance and remains stable across a wide range of temperatures from minus 269 to plus 400 Celsius (minus 452 to plus 752 degrees Fahrenheit). It does not melt or burn at the highest of these temperatures. On Earth, Kapton polyimide film can be used in a variety of electrical and electronic insulation applications.

The sunshield layers are also coated with aluminum and doped-silicon for their optical properties and longevity in the space environment. Doping is a process where a small amount of another material is mixed in during the Silicon coating process so that the coating is electrically conductive. The coating needs to be electrically conductive so that the Membranes can be electrically grounded to the rest of JWST and will not build up a static electric charge across their surface. Silicon has a high emissivity, which means it emits the most heat and light and acts to block the sun's heat from reaching the infrared instruments that will be located underneath it. The highly-reflective aluminum surfaces also bounce the remaining energy out of the gaps at the sunshield layer's edges. 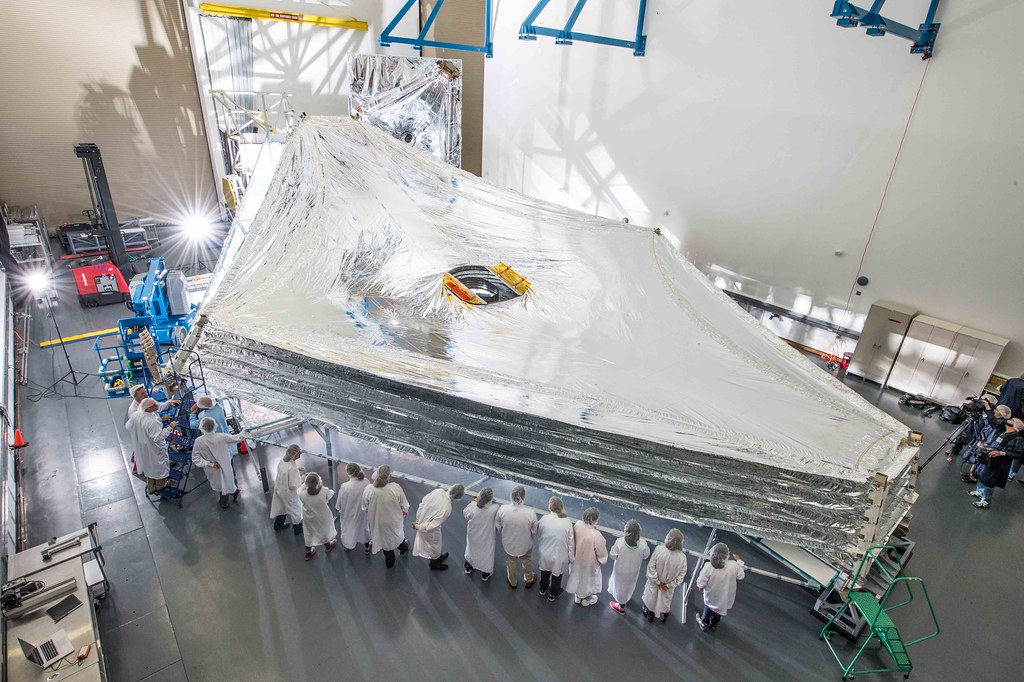 The kite-like shape and the number of layers of sunshield both play an important role on the telescope. Each of the different layers are positioned and separated with precision to accomplish their function.

"The shape and design also direct heat out the sides, around the perimeter, between the layers," said James Cooper, James Webb Space Telescope Sunshield Manager at NASA's Goddard Space Flight Center, Greenbelt, Maryland. "Heat generated by the Spacecraft bus at the “core,” or center, is forced out between the membrane layers so that it cannot heat up the optics."

"The five layers are needed to block and re-direct enough heat to get the telescope down to required temperatures, with margin," Cooper said. "The fifth layer is mostly for margin against imperfections, micro-meteoroids holes, etc." The gap between the layers provides an additional insulating effect.

The layers are slightly different sizes and different shapes. Layer 5 (just under the primary mirror) is smallest and Layer 1 is largest. Layer 1 is relatively flat and layer 5 is more curved. The layers are closer together at center and further apart at the edges to direct heat from center to the outside of the layers.

The telescope optics (like the infrared camera and mirrors) must always be protected from direct exposure to any hot objects. So the membranes are sized and positioned such that the mirrors only have a direct line of sight to the cold Layer 5, while the sun only directly shines on Layer 1 no matter which way the observatory is pointed. "This has been shown through testing to arrest a tear and keep it from extending outside of a given grid area," said Cooper. So, if a hole occurs in a layer of the sunshield from a meteoroid, or small meteor, the size of the damage is limited. These are not intended to stop a meteoroid, but rather to contain the area of damage.

Extreme Temperatures and the Sunshield

The material of the sunshield does shrink as it gets colder, and the hot layers expand. Cooper said, "The Kapton variety minimizes this compared to some other material choices. We have tested the material so we know how much it shrinks. We account for this in both our manufacturing and in our analysis predictions of the shape we will get in space.  We have also tested a one-third-scale five-layer sunshield at temperature and vacuum to verify our predictions."


Below is a video showing sunshield deployment tests.

The below video shows construction of special structures on the sunshield that shape it to best reflect heat.